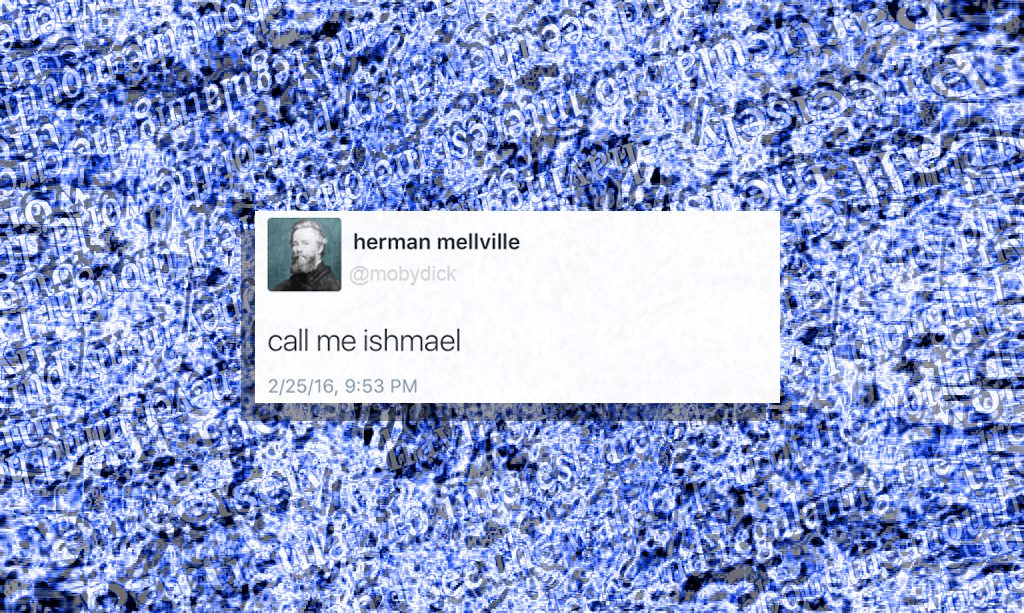 The social media platform Twitter doubles as a content-delivery tool in which artists can engage audiences in markedly novel ways. With the simple click of a button, an 140-character tweet is broadcasted to each of a follower’s private feeds. The result is a real-time stream of punchy quips, random thoughts, composed poems, dank memes, or any bite-size parcel of information that fits in the character limit. Looking backward in history we can view the aphorism as a proto-tweet and see that writers have been approaching a certain kind of Literature with the same underlying tenets and motivations that leads a person to tweet. A few people that would have probably maintained intriguing Twitter presences include Friedrich Nietzsche who intermittently composed short aphorisms and Ezra Pound who wrote art criticism in blasts of sentences.

Twitter affords artists a venue of expression in which they do not or can not find within other more traditional modes. One it’s greatest strengths may be its flexibility of use. Available essentially wherever the Internet can be accessed, through computer or mobile device, the way a person produces content for their individual feed can vary significantly. Some users tend to bust out their tweets in a stream-of-consciousness manner and rarely save drafts or edit. While other uses tend to carefully compose tweets and save drafts and only release selected content, a further level of control can be exerted by some users that use Twitter like a publishing tool and release works, such as Mark Sample’s Station 51000 or Jennifer Egan’s Black Box.

A twitterbot is a programmed application that automatically posts tweets without the supervision of a human. Mark Sample employed a twitterbot in the composition of his experimental work, Station 51000 (@_lostbuoy_). Station 51000 is an ongoing project which mashes up the generated data of a rogue buoy at sea with randomized snippets from the Herman Melville novel, Moby Dick. Each tweet by this account seems nonsensical. Some are more comprehensible than others, such as ones that combine recognizable quotes from the novel. However, once these familiar quotes are combined by the wind direction reading from the buoy, we are confronted with a Frankenstein monster. The reader is at times bewildered or intrigued, other times frustrated and lost.

Station 51000 currently sits just over 200 followers, which is admittedly a low amount on the Twittersphere. Although like any other art mode, the artist seeks exposure and attention for their work, for content released on Twitter the follower count is not always the defining factor. As the account which hosts the work Station 51000 is public, one can visit and view the ever-shifting work whenever they please without the commitment to following. However, a case for the interactive experience that a follower gets for following a twitterbot like Station 51000 can be made as well. Let’s metaphorically approach a Twitter feed as a river that constantly flows. The tweets that Station 51000 are programmed to make then appear on this stream randomly and without any warning or notification, until a user is scrolling down their feed and is reminded of this lost buoy. In this way, the buoy continues to assert its relevance. This relevance is always personal for the follower. Like the writer for antspiderbee.com, a person can approach these notifications analytically and believe them to be “a commentary on the Internet of Things and the vast amount of data generated by sensors in the modern world” (Jorgensen). Or a follower can appreciate these little reminders playfully, taking joy out of the random appearance of a lost buoy in the digital stream of their Twitter feed.

The character limit of a tweet is perhaps the medium’s most striking and defining trait. A comparison can be drawn to the limitations of formal poetry, such as the syllable count of the Japanese Haiku or the strict form of the European Sonnet. It appears that the character limit becomes the force that most readily lends Twitter to an inherently poetical use. Because the user has a small amount to fit in what they want to say they are forced by the structure to charge their words with the highest possible meaning. Simply speaking, they gotta keep it short and sweet. This act of condensing encourages the ingenuity which provokes invention and change within language. Compare the now common phrase “lol” which was born on early online message boards that were the precursors of Twitter. These abbreviations which arose out of necessity and ease on the Internet are one example of how a condensation of meaning is born out of digital means. A future essay may go more into depth about some ways people have already used Twitter to add to the ever-evolving English language, but I will rest for now simply pointing out the potential for this to happen.

Serialization has always had a place in Literature. Most people are able to cite Dickens’ consecutive publication in magazines and newspapers as one of the most prominent and well-used application of the method of serialization. However, the way that Twitter approaches the concept of serialization is a little bit different. It allows the serialized pieces of a work to be delivered as quickly (within seconds) or as far apart (months, years…) between other tweets as desired. This ability of a user to play with the time between each tweet is one of the most distinctive aspects of the creative potential for Twitter. An artist can publish in traditional installments, such as Jennifer Egan did in Black Box or they can publish randomly, like Station 5100.

Another important aspect is the tweet as an individual unit. An individual twitter presence is a conglomeration of many tweets over a series of time, like a Lego castles constructed out of many individually colored blocks.

When looking at Egan’s Black Box we can see how an artist approached both of these traits of the medium to publish a short story via Twitter.

What seems to be the least utilized aspect of Twitter is also its most valuable in consideration of the potential for the experimentation of narrative within the medium. Every tweet is time-stamped, meaning it exists solely in one place in time. A repost of a tweet will always be different because the clock is always ticking. In the context of experimental narrative, playing around with the time each tweet is sent out seems about as important as what each tweet says. Marketers already know all about this: there are peak times throughout the day where a tweet will get the highest amount of attention possible. But attention is not always the point when producing a kind of art. The control over the instantaneous release of the tweet is the most masterful stroke of the artist. Possibilities include large amounts of drafts being inserted into a programmed application that will post selected tweets at pre-ordained times. The notion of creating real-time experiences by doing this is exciting. It begins to blur the line between a Twitter account operated by an actual person and a fictional account designed by a writer and ran by a computer. We all can play the character of ourselves on Twitter, but who will be the one to play someone else?

The critic Harold Bloom calls Shakespeare the inventor of the modern human for his ability to craft whole, multi-faceted characters in his plays. At the time when Shakespeare was writing for the stage, drama was at the height of popular appeal. As a social media platform, Twitter is used by millions of users for a variety of potentialities. The mode is capable of capturing the most intimate words or private thoughts of a person. It can be used for propaganda. It can also be used to construct semi-fictional images of a person such as the accounts known as “Brand” Twitter. For uses of Literature the potential remains to, like Shakespeare did with the experimental mode of theatre, to construct the nature and feelings of the day. To invent the post-modern human.

Twitter as a serious mode for literature is still in its infant stages: with experiments such as Station 51000, we start to see the potential for twitterbots as an inclusive experience to purport a concept of randomization that takes place over the course of hundreds or thousands of tweets. With more traditional uses of the form such as Black Box we see how an author has used the platform as a unique mode of publication. Further, with everyday users tweeting more and more we can begin to incorporate the personal and trivial in long blocks of narration to form a kind of memoir. From whatever avenue one approaches Twitter, the website remains a powerful platform for promotion and instant delivery of content; it is a tool artists of the future should not take lightly.