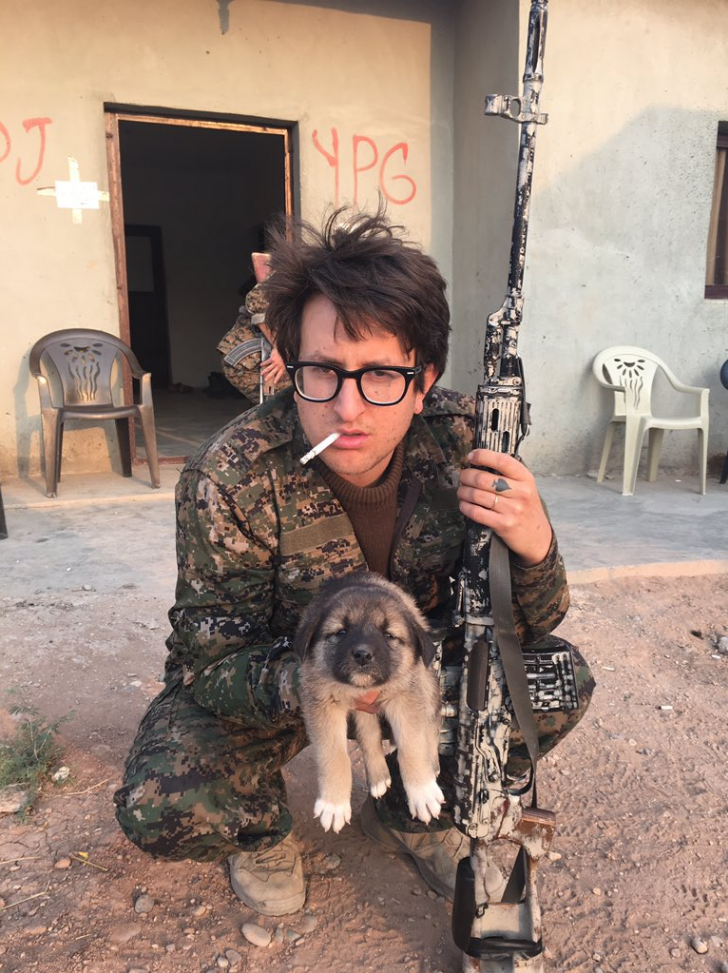 There have been several reports and instances of ISIS recruiting Westerners for combat in Syria, though the phenomenon of Westerners joining ISIS resistance movements hasn’t been quite as widely discussed. Recently, Twitter user @PissPigGrandDad boarded a plane to Syria to join the YPG (the People’s Protection Units), a guerrilla combat force in Nothern Syria, and has been documenting the experience via Twitter.

Active since 2011, the YPG have participated in several combat engagements in both the Syrian and Iraqi Civil Wars. Their ranks are primarily Kurdish, though they recruit from various countries and ethnic groups. The YPJ is their women’s brigade. The democratic people’s army is widely credited for helping to defend Northern Syria from ISIS. There are said to be 50,000 members of YPG in total–including over 400 foreign volunteers.

A quick perusal of @PissPigGrandDad‘s Twitter account reveals quite a bit of active engagement in both political discourse and sarcastic witticisms. He’s loosely affiliated with what some have termed the “irony left” (which might be thought of as the leftist counterbalance to the “alt-right”). Recently, he’s been posting images and videos of himself in a barracks–handling arms and puppies alike, showing off his anti-fascist tattoos, and talking about destroying ISIS.

Surely, his joining reveals a sincere commitment to ideology and an immense sacrifice. However, his lighthearted approach to the whole experience may come as a surprise to some. As Emma Goldman said, “A revolution without dancing is not a revolution worth having.” Or, as Piss Pig says, “I’m a Communist first and an irony boy second and I’m not trying to build a personal brand so u can eat my ass until the sun explodes.”

i will destroy isis

To misquote Celine, when you’re in, you’re in pic.twitter.com/QTZI3DOzd3